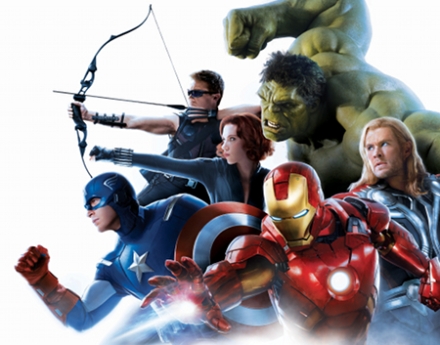 Hello everyone this my first review I like to right thinks about mvies and stuff,,

If you haven’t clicked the back button yet, WELCOME TO MY DEBUT REVIEW: Marvel’s The Avengers! It has taken me forever to finally get my ass in gear and actually write something. I will try to make this a weekly thing, if that’s okay with you. If you don’t like spoilers then you’re OK by me, but this review has some so do not read it if you don’t want to find out Snape kills Dumbledore. But, seriously, who has not seen this movie yet, gawd! Anyway, I have been fortunate to see The Avengers (in 3D) twice now in two very different settings.

The first time I saw it was at the end of a LONG ASS marathon. The marathon included The Incredible Hulk, both Iron Manses, Thor, and Robocop. It started at 11am and ended at midnight with the premiere of The Avengers. Needless to say, watching super-powered men beat people ofUP all day can be rather taxing on a man’s soul. Surprisingly, I was doing fine until 12am rolled around and my eyes started betraying me. My gut was filled to the brim from a day full of cramming miscellaneous candy and fast food into my gullet and I was ready to sleep or puke or sleepuke. Not a good way to watch a movie you’ve been waiting patiently for years to see.

By the time the feature film was over my first impulsive reaction to the movie was, “That’s IT?” Yes, I felt like a spoiled child that got a private jet instead of the NASA approved space shuttle he demanded for his 10th birthday. I slept through a couple scenes and nit-picked the shit out of everything that I was awake to see like the nerd I am. I still enjoyed all of the action-y parts; especially the 3 hours spent blowing everything in NY up at the end (second half) of the film. Not spoilers. It’s in the trailer don’t blame me brah! Bottom line is I gave it 3 stars out of 5 because everything semi-sucked and would have been better if I had directed it.

Fast forward a few weeks and I was on my way to see The Avengers for my second time, this time with my parents. This time I was wide awake and ready to take in a matinee before going out to eat. This time I WAS READY. I was thrilled by how different the experience was when I left the theater. Since I wasn’t pending coma I actually listened to all of the clever dialogue the heroes threw around and caught on to some plot points that I missed during my first go. The actors had superb chemistry while the characters they portrayed shared great intentional anti-chemistry. Mark Ruffalo as Ed Norton as Bruce Banner did a nice job giving off the nerdy, out-of-place vibe especially on the SHEILD Helicarrier. I realized how many parts I truly missed while I dozed and I really felt for the characters throughout the movie.

However, being conscious alerted me to a couple things about the presentation that were an issue. Some things just did not sit right with me. For instance, a majority of the action was believable but some parts just made you go, “Wait, what?” I understand Hawkeye is supposed to be trained to never miss but explain to me how he can be looking one way, be talking on the phone, and completely turn his bow behind him and snipe an alien off of a flying motorcycle midsentence. Another prime example is when Black Widow spin-jumps ten feet off of Cap’s shield like a cartoon in CGI glory. Even though these are superheroes they all have their limits. Not everyone can smash through a giant wormspaceship with ease like the Hulk.

Another problem I had with The Avengers was the reused villain. Loki just got his ass kicked in Thor’s feature length. You would think he would wait until Avengers 2 to show up again with a better, more devious plan to become the King of Everything. I guess I’m just not a big Loki fan. The aliens didn’t even hold their end in satisfying my extensive taste for comic accuracy. I wanted skrulls. They said there would be skrulls. They were some cheap Ultimates (alternate) universe excuses not to have some presumably more expensive cool shit. Skrulls are hostile green shape shifting aliens that try to assimilate into Earth’s society to attack from within. I would have liked a more interesting story that focused on just the skrulls instead of leftover, reheated Loki. It would have been a tad bit mysterious and they wouldn’t have even had to pay Tom Hiddleston. They could have even introduced a new villain like Kang the Conqueror, John Travolta, or any of the other Masters of Evil.

Another event at the start of the film pissed me off. Hawkeye gets two lines and is instantly a villain. Come on! Oh, that’s right! Loki and an army of aliens isn’t enough to carry a movie. You need one of the Avengers to change sides to truly accomplish anything. I was looking forward to discovering some of Hawkeye’s shadowy past in the beginning of the movie but even when he comes back from the dark side nothing about him is really explained, other than he has a mysterious relationship with Black Widow.

With that being said, I was glad I took another look. After my second viewing it occurred to me that the movie would never be every fanboy’s wet dream. It is impossible to fit everything into the script, runtime, and budget so it is nice to appreciate Joss Whedon’s adaptation of the comic. I give Marvel’s The Avengers 5 stars because I do not think it could have been much better! The good outweighs the bad and I will surely be stealing the VHS when it hits Blockbuster. For real call me if you want a bootleg copy.

The after credits extra credit scene blew my socks off too! Now I cannot wait for Rise of the Avengers 2: Unleashed Revengeance. After bitching about the villain the whole time I was finally rewarded in the end with a quick snippet of my favorite evil Mad Titan. Ladies and gentlemen, Thanos!