We Are Still Here is a 2015 film set in 1979 about a husband and wife (who I just learned is played by Barbara Crampton, the girl from Re-Animator!) who are grieving the death of their son. They move from New York to rural New England to find some peace on the countryside. They start hearing voices in their new house, thinking their son might be trying to contact them from the other side. They are very wrong.

This is the type of movie where it’s too hard to talk about what I liked without describing scenes in detail and spoiling the best parts, so I’ll try my best to avoid that. We Are Still Here paints a creepy picture of an old house that has seen a lot of darkness. It might not be evident what terrible past it has witnessed until you step foot in the basement. The room gave the vibe of an even more sinister cellar from The Amityville Horror. I would definitely not go down there on my own, even if I was a plumber like the one in the movie. Let’s just say he found that out the hard way!

When the audience is finally introduced to the “monsters” in detail, it becomes apparent how much work went into detailing the costumes. They are equally parts mesmerizing and frightening! We Are Still Here has many moments where I thought I knew exactly what was coming next but I was thrown for a loop every single time! Instead of employing clichés at every opportunity, it brought new ways to the table to tell an old story. The intro scene was amazing because as it went on I was thinking to myself, “And now this is how I would open this movie.” Then, amazingly, the scene ended almost exactly like I was imagining! Nothing is better than getting the audience hooked from the first scene!

I have only one gripe with this film and unfortunately it has to do with a major plot point. If you don’t want to have the big twist spoiled for you, then skip ahead and check out my final rating past the picture at the bottom of the page.

The main thing I had a problem with was buying the faulty backstory of the townsfolk. While it added another layer to the terror, it didn’t make a whole lot of sense. The old man in charge shotguns a random waitress in the face because…well…I don’t really get why. Shes’s new in town, but that doesn’t mean she is involved with the people in the haunted house. Then he deals with his wife with the patience of an inmate. Finally, during the killing spree finale, he confronts the evil head on, then foolishly turns his back practically asking to be killed. The killing spree of the townspeople didn’t make much sense either. Why did they suddenly lose faith in a system that has been working for 120 years? Anyway, past all of that came the final scene which I thought was a bit cheesy, but I did like how it leaves the fate of the family up to the viewer’s imagination. It appears that the survivors get a pass from a grisly end, but personally I think that they were just lured to the basement to finally “be with their son”. 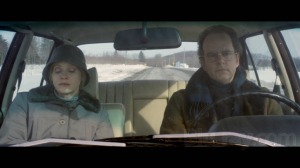 4 charred victims out of 5

One thought on “WE ARE STILL HERE”