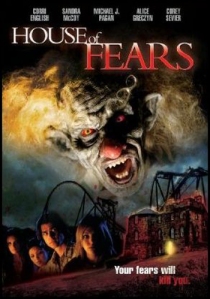 Take a look at this poster and tell me if you would watch this movie. Unless you are unreasonably afraid of clowns (apparently this image would prove unsettling to people with Coulrophobia) the goofy devil-clown on this bill would indicate that House of Fears is a cheapest of the cheap Z-movie. And don’t even get me started on that terrible excuse for a tagline. Originally, I avoided it when Netflix recommended it. 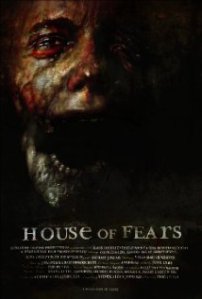 Now what are your thoughts on this version? When skimming through connected horror films on IMDB earlier this month, I came across this picture. Pretty terrifying, am I right? So I read the synopsis and looked it up on Netflix to add to my list, when I found the first poster again. I know you’re not supposed to judge a book by its cover, but that was exactly what I was doing at the time. I figured I’d add it anyway for MASSACRE MARATHON and if it sucks, it sucks.

I like the idea of a genre film taking place inside of an innocent Halloween funhouse that turns into a real place of terror and torment. The question of “Is it real or just a gag?” draws a special faded line of uncertainty that is hard for me to resist. In this instance the plot has a decent set-up for the characters. A believable energy flows as the teens toss quips and sling insults at each other their whole way to and through the attraction. It reminded of me and my group of friends teasing each other constantly. It does kind of fall off the deep end when the guys interact with the girls like stereotypical “hunks” in a teenage girl’s soap-drama. Why is this the second movie this month that has surprised me with Jared Padalecki’s appearance? He’s only in it for a split second cameo but it feels like he is haunting me! Yes, “dude”, I will get around to watching Supernatural NOW STOP BOTHERING ME!

Besides the organic flow of most of the gang’s dialogue, the monsters of the self-proclaimed horror house were various and authentic. The fact that you can have more than one type of killer is why I like the haunted house concept the most. One villain stood out the most, the Undertaker. He was like a cross between Slenderman and a vampire from 30 Days of Night. Keep in mind the Slenderman myth was conceived circa 2009, two years after this movie released. Coincidence? Probably. Other fiends include a gas-masked mannequin, a scarecrow, and the killer clown from the one-sheet above.

Towards the end, House of Fears fizzles out. It boils down to a “played safe” storyline, no doubt intended to be less risky, but aside from this and the many horror clichés, it’s an adequate flick to put on at this time of the year. The props and SFX were believable and I was entertained. After all, that’s what anyone looks for in a movie. Entertainment. And this movie delivers. Entertainment, that is. Like everyone hopes for when they see a film of any shape or size. All the world needs is a little entertainment. Entertainment is the soul’s esca-[Hello, this is The Manster’s handler speaking. I have assumed control and tranquilized him. You see, sometimes The Manster’s brain will get stuck on one track, like a broken record, if you will. I simply put him to rest and when he wakes up he is reset, almost like the reboot of a computer, if you will. If you will, if you w-] GET OUT BALD ENGLISH BUTLER-MAN!!! GET OUT OF MANSTER’S HEAD! GET OUT GET OUT GET OUT! My apologies, sometimes when my caretaker speaks, he starts talking in circles and I have to stop him. He stuck Manster with big pointy needle, but I was only pretending to sleep. Anyway, House of Fears gets one severed thumb up out of two. That’s like the middle ground, leaning on the good side. Almost like-