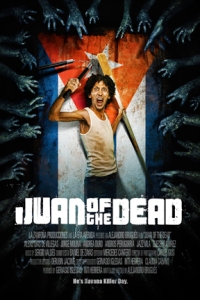 Some scary movies are so unintentionally bad they make you leave the theater laughing. Others don’t present themselves as comedic until halfway through. In this case, I knew what I was getting into. I heard great things about Juan of the Dead. No, it’s not a sequel to Shaun of the Dead, but it is just as funny in my opinion.

The difference between Cuban humor and English humor isn’t great; many of the jokes from both films fall into the same category of comedy. Cuba’s political roots are heavily represented in Juan’s big film and I’m sure I missed some of the subtle tones in the dialogue by not being Cuban, but don’t let the small culture barrier deter you. The majority of the material is hilarious (with the exception of a few dull scenes at the start) and makes up for some of the less palatable special effects. There are, however, some great gory sequences thrown in, but I think the film’s small budget hindered most of what they could produce.

You don’t need a huge budget for a film like Juan of the Dead. All you need are funny characters, good dialogue, a simple working plot and zombies. This above average horror-comedy checks off the list perfectly, and for that I commend it. It’s not the best of either genre, but it’s worth giving it a chance.