Welcome to America, where one night a year all crime is legal. For 12 hours you can rape, pillage, and kill as much as you want, to anyone you want, and be absolved of all wrongdoing in the morning. But beware, a lack of active law enforcement or medical aid means you might find yourself a victim if you aren’t careful. Organized gangs are roaming the streets and they might target you if you present yourself as weak. So as long as you are cautious and know when to retreat you are guaranteed to reap the benefits of The Purge. 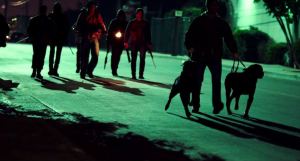 The Purge: Anarchy creates a effective nightmare scenario and surprisingly surpasses its predecessor in nearly all categories of the rubric. I think a lot of this comes from the fact that it doesn’t only follow one family and it isn’t confined to one house, like it’s prequel The Purge. The actors are mostly unknowns, differing from a previous lead of Ethan Hawke, and that is a good thing for a movie with this kind of story. I want to be out in the action, jumping around from setpiece to setpiece, not locked in a barricaded mansion with a couple of run of the mill slashers. After the disappointing first film I put my faith in the sequel and I wasn’t let down! I would be terrified if I was left on the streets of a city full of murderers with no protection or shelter and Anarchy constructs this horrific vision with clarity. 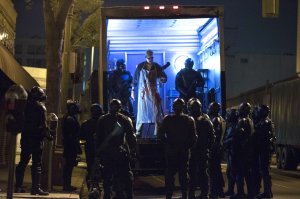 The only major problem Anarchy has, aside from the mouthy, frustratingly annoying kid, is it cuts off the ends of interesting scenes. Many times, a scene is set up in detail and gets torn away right as things get cooking. I would have absolutely been fine with a longer cut exploring more of stories across the city. There are plenty of psychopaths on the loose (reminding me of the bosses in the Dead Rising video game series), but the film only fleshes out a select few. The same crew is working on a sequel as I type, with Frank Grillo (Captain America: The Winter Soldier) reprising his role as the badass savior, and it makes me wonder if they intentionally left things out and kept looses ends open for the third Purge. As long as it has the same stopping power as Anarchy it will earn positive marks from The Manster. 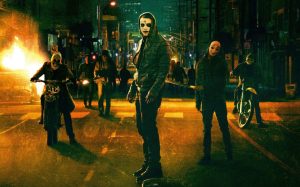 4 masked psychopaths out of 5

One thought on “THE PURGE: ANARCHY”