♆♆♆- I have already seen this movie.

Evil Dead II: Dead By Dawn is the 1987 semi-remake sequel to The Evil Dead starring look-alike actors portraying generally the same characters from the first film but within a different timeline, with Bruce Campbell reprising his role as Ash. This time around, Sam Raimi had a much larger budget to work with. This movie is great, but it fell short of being the best of the trilogy because of how humorous and over the top it was.

The intro to Evil Dead II zooms by at an astronomically fast rate, rewriting how Ash’s adventure began. This variant sees Ash and his girlfriend alone arriving at the cabin. I give it props for quickly skipping through the typical teen love drama horror movies are known for, showing the filmmakers knew we all had our fill from The Evil Dead. The intro winds down with Ash being chased by the evil unseen spirits, like at the end of the first film.

Only one scene bothered me in this movie. When Ash is watching the reanimated corpse rise from the dead, it starts acting like an asshole. Sorry, I don’t know how else to put it. The dead body jumps out of the grave and starts frolicking (yes, fucking frolicking) around the front yard. The effects used in this sequence were so inexcusably bad that I felt like all of a sudden I was watching a ripoff Tim Burton animated film. It was like some sort of stop motion claymation where the body didn’t match the head and the movements and articulations made me cringe. This was only a minor scene and didn’t last long enough to ruin the rest of the movie for me, so I’ll get over it. I hope. 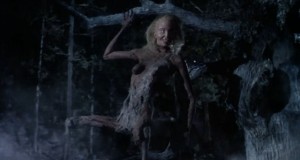 Though I say “fell short,” I don’t mean by that much. Most fans of the series disagree with me and praise Evil Dead II to be the greatest one of all. I simply put the horror aspect first and the comedy second, so ranking this below its predecessor is a no-brainer for me. It’s all about which taste you prefer, which genre is more appealing. I only had one small bone to pick with this sequel and that is not nearly enough to penalize it. This is the one where Ash gets his iconic weapon modification. This is the film that created such memorable quotes as “Groovy!” and “Who’s laughing NOW!”. This is the movie that cemented Ash’s place in horror hero history. You have to see it!

5 cheesy-good one liners out of 5