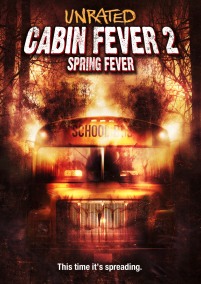 Because nothing can be a standalone feature anymore, welcome to the Cabin Fever Extended Universe, or the CFEU for short.

OK, I know this came out way before that type of nonsense became a trend, but it is still an incredibly needless sequel and horror has been known for pumping out the redundant. The first Cabin Fever was Eli Roth’s opening punch in his salvo to become a horror icon. It was cult classic horror. Spring Fever is a shameful cash-in continuation with no soul. The script was written by what I could only assume to be a 12 year old boy. The jokes are a sleazy as they come in an a bad way, especially in contrast to something like the asshole-ish charm of Ash Williams in his hilarious TV run. The only thing this film made me do was clamp down harder on the hate I clutch in my claws for genre director Ti West.

2 rotting ideas out of 5