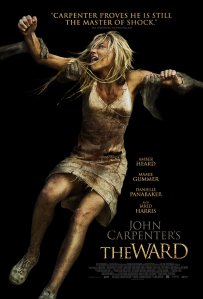 Exhausting almost all of my options the past few nights, I let a random number generator pick tonight’s movie from my list. One of my favorite directors of all time, John Carpenter, popped up with his newest outing, The Ward. Amber Heard (Zombieland, Machete Kills) stars in this horror-thriller about a girl who has just arrived at an eerie mental hospital. The film is set in the 60’s and showcases the inhumane, torturous practices of institutional doctors back then, including shock therapy and lobotomy.

The Ward was generally panned by critics but it seems like most of the public liked it. While i thought some of the action shots where a bit cheesy, the rest of the movie impressed me. Mainly because I didn’t see the huge twist coming at the end. It was right in front of my face the whole time and it still blindsided me! It might not fool you and you might prematurely figure out the mystery, but in my case the shock achieved what was intended.

The evil monster girl had a face only a mother could love. I felt there where too many jump scares where the make up effects of the girl would have been enough to scare. All of the actors played their parts to a T and each and every one of the roles was on a different point of the spectrum.

I was starting to wonder how this many pretty girls were rounded up in the same lonely asylum. That was probably the biggest clue left under my nose. When the big reveal was revealed, I revealed to myself that all of the pieces to the puzzle were so close to being connected throughout the film. I know there have been plenty of scripts that end with a dissociative  disorder identity crisis, and that must have been what made critics shun The Ward, but there was still enough here to confidently call it original.

Sure the plot might have moved at a slower pace than I would’ve liked and this isn’t anywhere near as good a story as Halloween, but I think there is nothing wrong with being a simple film. It’s actually quite refreshing to see this smooth of a story unfold. It offers a break from the unusual and jarring atmosphere of other horror tales. The Ward doesn’t do much to scare, but gives you a reason to go back and piece together the events of the film and that is something I particularly enjoy.

3 frontal lobe lobotomies out of 5