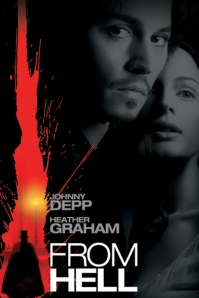 It was nice to see some well-known actors on-screen for a change. I say this because most horror films cast relatively unknowns to make the viewers less comfortable and maybe make them forget they are watching a movie (also to keep a tight budget). Johnny Depp and Heather Graham (Boogie Nights, The Hangover) star in From Hell, the story of a clairvoyant London detective searching for Jack The Ripper. The movie was based on the 1989 graphic novel by Alan Moore.

There were many details meticulously placed in this film inspired by real evidence of The Ripper. However, this is a movie that can be classified as historical fiction. Nobody knows who he really was. There are hundreds of theories but the world will probably never know.

Much of the film is made up of boring meetings of proper Englishmen bantering on about cryptic nonsense (I bet you just read that with a British accent) and the tidbits related to propelling the plot further sometimes get lost in translation. When Jack kills, From Hell starts to get exciting, but that only happens five times in a two-hour movie. Depp does a good job with his limited character and his assistant, played by Robbie Coltrane (better known as Hagrid from the Harry Potter films), has his charm. Graham leads her troop of prostitutes through tough times, made tougher only by their own stupidity. It was quite comical how the hookers’ deaths were so similarly orchestrated. You would think after two out of five friends were slain they would get smart and start to play it safe.

Another thing that bothered me was how much of a production The Ripper made in the middle of the street when dissecting his victims. With his big box of surgical tools glistening in the moonlight, he showed no urgency while performing his gruesome work, assuming not one other person would be wandering the road at night. When he does get spotted, his accomplice just shoos the bystander away and that is that. Why wouldn’t he kill the witness and why didn’t the witness run to the police and tell them who the killer was? Many things didn’t add up in From Hell, including the admittedly creepy secret society. I understood the final revelations presented, but I wasn’t pleased with Jack’s motives. It was all too complicated of an exposition and there were too many characters that didn’t even need to be in the film. For how highly From Hell was recommended to me, I was greatly underwhelmed.