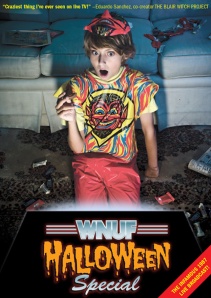 WNUF Halloween Special is a curious work of art. It was made in 2013 but appears to be filmed in 1987. In fact, its grainy appearance is what grants it its charm. It was a very small release, costing only $1,500 to make. The creators wanted to keep it shrouded in anonymity, so they pursued a silent ad campaign consisting of throwing VHS copies out of car windows and dropping off piles of tapes at conventions. The whole entirety of WNUF was supposed to capture the essence of an earlier era of entertainment. While I’m all for a heavy heap of nostalgia, unfortunately this film takes it too far.

There are many things this movie gets right. When a title is set in that sweet spot time period right before I was born it draws me into fantasizing what it would be like if I came into this world a few years earlier. With the glow WNUF Halloween Special produced I immediately gravitated to its light.  The tape clicks on and a local news broadcast starts playing. The anchors are dressed in costumed regalia and the studio is set with all of the makings of a holiday extravaganza. It’s Halloween ’87 and it’s time for the primetime news. Almost every story and commercial throughout is Halloween related and the level of holiday spirit is boiling over the cauldron.

The news anchors keep reminding their viewers of the upcoming live broadcast of a reporter’s encounter with the local alleged haunted house. Between the various news reports (featuring everything from hardcore Christians against the celebration of the devil’s holiday and the dentist’s “cash-for-candy” drive) and the plethora of faux commercials I was starting to wonder when the nightly news would end and the haunted romp would begin. By the time the reporter steps foot in the house the movie is almost exactly half over. I was willing to give this a pass, as I was being fairly entertained so far, although I was expecting the second half to make up for the first.

I imagined the end of WNUF  would have a shocking finale, something that would be so unimaginably horrible and grotesque to see on live TV. Instead I was rewarded for patiently wading through monotony and impostor advertisements by ten seconds of minuscule gore and a flop of a conclusion. I totally understand what the director was going for by making it seem as close to an actual broadcast as possible, but there is a reason why nobody wants to make a movie like this for more than two grand. Unfortunately a few funny comments made by the sarcastic dick reporter and a sentimentality for the 80’s does not make up for the lack of scares or interesting scenes. WNUF Halloween Special is being compared to The Blair Witch Project (even praised by Blair Witch co-director Eduardo Sanchez himself) but I think the makers of this movie have a lot to learn before they are put up on the found footage pedestal next to “the witch”.