If by “Freddy delivers” they mean extra cheese then what an apt tagline. A Nightmare on Elm Street 5: The Dream Child is not the new Coheed & Cambria album title, but the fifth installment in the popular Freddy Krueger franchise. Although he is the one slinging trashy insults left and right, at this point in his career Freddy has been solidified as the brunt of the jokes.

END_OF_DOCUMENT_TOKEN_TO_BE_REPLACED

Stuart Gordon’s Dolls is classified as one of my specific triggering films from when I was a wee Manster. Watching it today shines new light on the bad acting from most parties involved but in turn gives me ‘Nam flashbacks to hiding under the covers in terror. The dolls are still extremely creepy today and the archaic stop-motion shots add a dated, unsettling lens to top it all off.

END_OF_DOCUMENT_TOKEN_TO_BE_REPLACED

Evil Dead, not be confused with The Evil Dead, is first-time writer/director Fede Alvarez’s 2013 semi-remake of the 1981 Sam Raimi classic. Dumb poster tagline aside, it’s an adept interpretation of the original. Nu-Dead didn’t fully hit the mark for me, but it stills reaches the lofty goal of my rewatchable zone.

END_OF_DOCUMENT_TOKEN_TO_BE_REPLACED

Getting off on the wrong foot has a sequel and its name is Bad Taste. An ironic moniker and perhaps an omen glossed over. It turns out watching a renowned filmmakers first film for that reason alone is not always as enjoyable as intended.

END_OF_DOCUMENT_TOKEN_TO_BE_REPLACED 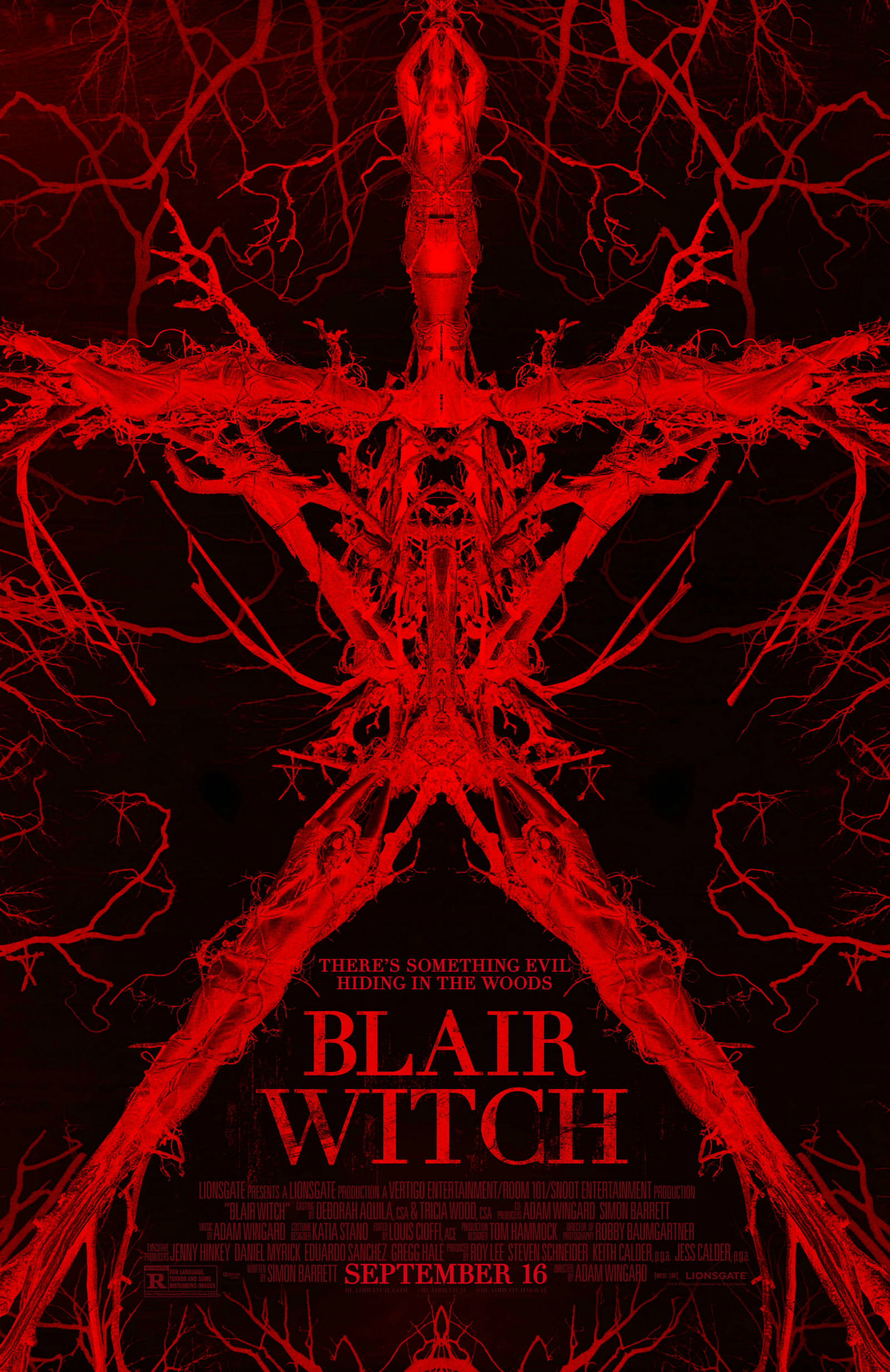 There was a time when a little horror movie was being developed by Adam Wingard (You’re Next) under the moniker “The Woods”. Then, in an abrupt turn of events two months ago at San Diego Comic Con, that film was revealed to be a third entry in the Blair Witch series. To help keep the secret while in production Wingard actually filmed the movie in Vancouver, as opposed to the original being filmed on location in Burkittsville, Maryland. I think it’s safe to say that nobody saw this coming, especially nearly 20 years after The Blair Witch Project took the nation by storm. Immediately following the reveal I was extremely void of excitement. The trailer looked like a cheap attempt at rebooting a classic and left me with not only a bad taste in my mouth, but a streak of anger. But as the release date got closer and the reviews started pouring out I found not a single write-up that condemned Blair Witch as I assumed they all would. So, I decided to re-balance my expectations and see it in the theater. Maybe there was a lot more to this incarnation that wasn’t hinted at in the trailer. END_OF_DOCUMENT_TOKEN_TO_BE_REPLACED

No series has become a yearly genre staple like the Paranormal Activity series since the Saw collection. They are making these faster than I can bother to watch them, as was the case last year when I didn’t get to Paranormal Activity: The Marked Ones, so I made a point to catch it this time around. Although it is the fifth entry in the series it was not assigned a number in the title because of it being a spin-off of Paranormal Activity 3 and not an official entry. Many people are have already been sick of this franchise for a long time now but something about the formula used in these films keeps bringing me back for more. I just want you to know (as with most movies) I went into this one with no predetermined judgments.

END_OF_DOCUMENT_TOKEN_TO_BE_REPLACED

I’ve had this movie on my radar for some time now. I was going to save it for this upcoming October but I realized I tend to say that about every horror movie on my list and that turns in to me not watching the genre as much as I would like. Also, I came across a jarring gif on the internet that had me stunned. When I found out it was from The Taking of Deborah Logan the movie got bumped to the top of my list!

I wasn’t necessarily expecting a found footage film when it started, but I think I’m so numbed to the sub-genre that it didn’t phase me at all. It wasn’t a typical shaky-cam intro, however. The beginning hosted the makings of a faux documentary and served as a great set-up. A medical student is filming her thesis on Alzheimer’s Disease and its effects on not only the victim, but the family and friends in close proximity. Deborah descends into the snares of the disease at a rapid pace, almost too quickly. The film crew witnesses some inexplicable events and begins to question what is really happening with Mrs. Logan.

END_OF_DOCUMENT_TOKEN_TO_BE_REPLACED

I had such a hard time finding this movie last night I almost gave up. I could only find it on Comcast Xfinity when I searched a specific way and when I did, there was no option to rent it in HD. So I ended up purchasing my first rental on YouTube. I paid a dollar extra for HD and the highest quality was 480p. Whatever. At this point I was happy enough to be watching the damn thing.

END_OF_DOCUMENT_TOKEN_TO_BE_REPLACED

I got a chance to see V/H/S: Viral, my most anticipated film of this MASSACRE MARATHON tonight at the Philly Film Festival a few days before its actual release. I felt special! I had high hopes for the third installment in the found-footage horror anthology series. There was a decent turnout for such a late showtime. It was time to see if the drive into the city was worth it…

END_OF_DOCUMENT_TOKEN_TO_BE_REPLACED

WNUF Halloween Special is a curious work of art. It was made in 2013 but appears to be filmed in 1987. In fact, its grainy appearance is what grants it its charm. It was a very small release, costing only $1,500 to make. The creators wanted to keep it shrouded in anonymity, so they pursued a silent ad campaign consisting of throwing VHS copies out of car windows and dropping off piles of tapes at conventions. The whole entirety of WNUF was supposed to capture the essence of an earlier era of entertainment. While I’m all for a heavy heap of nostalgia, unfortunately this film takes it too far.