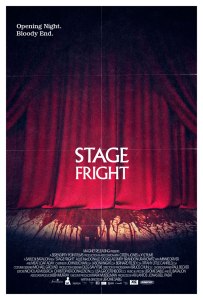 A musical to die for, literally. Stage Fright is a tongue-in-cheek production about a serious production. A camp for drama geeks is gearing up for what they hope will be a Broadway worthy performance. There is only one problem- a masked killer is on the loose with a vendetta against the musical. That won’t stop the cast and crew from getting their chance to shine. After all, the show must go on!

Right from the get-go Stage Fright makes sure the viewers are aware things will be over the top. Musical numbers break out every few minutes, both in their theater and as part of the movie. While the songs were charming it got old pretty fast. It was kind of cool to see rock legend Meat Loaf (The Pick of Destiny) sing a few tunes as the camp’s head counselor.

The “mysterious” villain ended up being who I suspected and started getting on my nerves as the film went on. I get that Stage Fright was supposed to be funny but his parts got a little too silly for me. His saw blade weapon props looked worse and worse as the movie progressed and eventually when shown up close seemed like obvious cheap pieces of spray painted plastic. The best thing I can say about him is that his kills were at least interesting, my favorite being the brutal opening mirror murder.

Much like the stalling portion of their production on opening night, Stage Fright seems to run out of plot that matters and flounders. It tries to substitute filler for progression, and that is where it falls flat on its face. Like the old saying…how does it go? “Clean up on aisle 9!” Wait, no…”Exit, stage right!”