Contracted is a movie where a girl sucks the wrong dick and turns into a zombie. You can use the poster above for reference. This movie was clearly put together with a teen girl demographic in mind; I wouldn’t be surprised if it was a made-for-MTV movie. The characters are all shallow husks and the actors don’t bring worthy talent to the table. The usual bad decisions characters make in horror films are amplified. The reactions of characters are even worse. Do you really expect me to believe that stalker guy would actually kiss that SCABBY, discolored face, even if it is his long-awaited first opportunity to score? Absolutely not! Would a restaurant manager force someone who looked like that to stay in the kitchen? No, he would most definitely call 911! 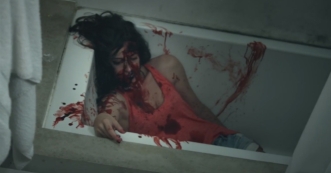 They tried to surgically install a backbone of story into Contracted with a drug addiction backstory and a serial rapist legend but they all ultimately fall flat. They should have just sacked up and did what I’m sure they set out to do: make a zombie attack movie. Instead of wasting a whole film showing the girl slowly going through changes, they should have had her get infected with a rapidly progressing virus in the first couple of scenes. Then they could have spent the rest of the film with her going around killing her inept friends (because she always hated them deep down) using her newly formed semi-intelligent scheming zombie brain, catching them all off-guard. She would be smart enough to drive her car to their house but not bright enough to avoid crashing it through their living room. Whoa, I better slow down before I accidentally write a better script! The only thing saving this movie from being completely demolished by the unforgiving back hand of The Manster is the grotesque zombie effects, appropriately grimy given the disgusting premise. Who knows, maybe watching Contracted: Phase Two will quell my woes. Pro-tip: I DOUBT it.