I managed to make it to the theater late tonight after work to see the baby of The Conjuring director James Wan, Annabelle. A little over a year ago when I saw The Conjuring I found that the part that resonated with me the most was the intro sequence featuring the titular demonic doll. I was fairly surprised when I heard they where going to take that and make it into its own feature-length film. I was on board!

Since this is the opening night of the movie I’ll refrain from going into any spoilers to give you a chance to see it for yourselves. Annabelle starts off slow, over-building the unimportant back story of the husband’s job hunt. John (Ward Horton) reminded me of the clean-cut, white bread Patrick Wilson from the previous film and Insidious fame. It took the film a long while to actually get to the doll reveal. After that I found myself heavily anticipating seeing the doll move on its own for the first time. And I waited…and waited…until finally…

…I realized it was never going to happen. That’s right! Throughout the entirety of the film Annabelle is technically not seen moving on her own on-screen. If you are a Chucky fan and are planning to see this movie based on how awesome little murderous dolls look on camera running around slicing people up then I would tell you to save your money. Other than creepy close-ups scattered throughout of Annabelle’s creepy facial progression to the demonic, she never becomes a “living” doll. Really she is just used as a set piece/pawn in a larger force’s grand plan. This leads me to my favorite thing about the film.

The “Tower of Terror” scene. When you see it you’ll know exactly what I mean. It involves an elevator and a sense of dread only your darkest nightmares can produce. There are a bunch of scenes like this one that seem heavily influenced by Wan’s earlier work in the Insidious series. Even though he only produced Annabelle, it seems as if Mr. Wan is making his own sub-genre out of his take on demonic apparitions. I love his designs and shadowy imagery he has been incorporating into his dark corner of the horror genre, and the soundtracks are always unnerving and unrelenting stabs of violins that make you feel more horrified than whatever you are looking at, but I’m starting to get worried that its going to get old if he keeps making movies like this.

I will admit that there were countless parts during the movie where I said to myself, “This is gonna be so stupid, because this horror cliché thing is gonna happen, and I saw it coming a million miles away” and then the action would take an unexpected turn. Although, there where a few unnecessary jump scares here and there, but almost every modern horror film has been abusing this for years now. “Nothing interesting or scary has been planned for this scene and we can’t come up with anything. Guess we might as well throw in a SLAM OF ORCHESTRA MUSIC! or a LIGHTNING CRASH!!! to get us to the next scene. Because budgets. And laziness.”

I feel the best part of Annabelle is not actually Annabelle, but the thing behind the doll, pulling her proverbial strings. I would also state that Annabelle is a step higher on the enjoyment ladder than it’s predecessor and is a good start to the glorious month of October! 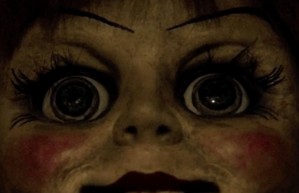