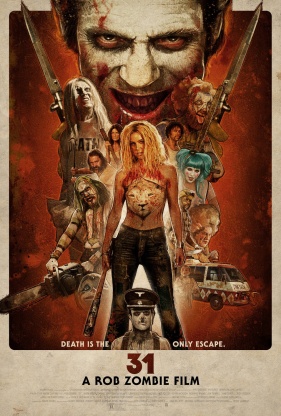 Love him or hate him, Rob Zombie has left his mark on the horror industry. His films are always graphic journeys into the DEPRAVED and 31 is no different. What started as a crowd-funded project has now finally hit the big screen (very briefly) to most critics’ dismay. While I didn’t hate 31, I wouldn’t say I was too thrilled either.

As anyone with any knowledge of what Zombie’s other films entail would guess, 31 is a grindhouse film slathered with blood, nudity, and EXPLICIT language. It pays homage to many different classics but doesn’t bring enough originality to the table to break through on its own. The handful of murderous psychopaths scattered throughout never stick around long enough to become memorable characters. The movie is almost two hours long but it doesn’t feel like much happens in that time frame. Although the gore doesn’t seem like it is held back, some violence had to be toned down to appease the MPAA. I look forward to a second viewing when the unrated cut hits the shelves to see if anything worthwhile was missing.

Some of the writing, especially when it comes to dialogue, is laughably bad. Sometimes I was under the impression it was intentional in order to pull a few chuckles, but it’s worrisome to suspect that wasn’t always the case. I started questioning what I was watching around the time the Spanish-speaking midget Nazi first appeared. My favorite thing, apart from the brutal carnage caused by the chainsaw killers, was the man/monster pictured above. Doom-Head, played by Richard Brake, was the sole savior of this film. After this role, I’ve heard people pushing for him to be the next Joker and I would have to agree. His performance is the only one that will keep 31 on the good side of my memory bank. I generally like Mr. Zombie’s films, but this sleazy, lazy execution of what essentially could have been a well-received silver screen adaptation of Rockstar Games’ cult classic Manhunt, is instead destined to be forgotten in a year. He probably should have went ahead with that biopic of the Broad Street Bullies rather than CHURNING out this mediocre work.