Going into Mr. Jones I was ready for the worst. Netflix predicted I would give it two stars and for someone like me to give a horror movie that bad of a rating surely meant the public reviews averaged out to be less than two stars. On the surface it looked like one of those movies where the budget is tiny and the story would be lacking. I anticipated a slow, boring trod through the woods with a 2-man cast and a bunch of creepy stick-scarecrows. Nothing scary or supernatural would happen and the ending would reveal the characters jumping at their own shadows, effectively wasting the viewers time. Basically, I prepared myself for a RIPOFF of The Blair Witch Project. 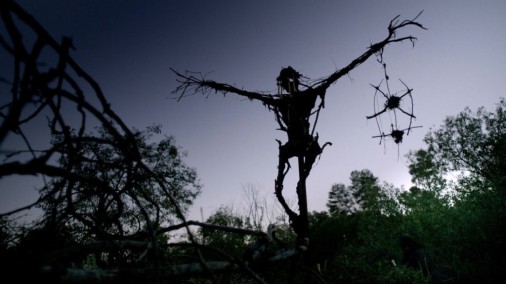 It turns out Mr. Jones has a lot more to it than I initially gave it credit for. The backstory isn’t just a cock tease, it leads up to a situation instead of remaining an idea. In fact, there are a few specific things the new Blair Witch seemed to have gotten from this 2014 film. Speaking of influences, it was clear the people behind Mr. Jones are fans of the Evil Dead franchise because there a various nods throughout.

I was wrapped up in the CHAOS when Mr. Jones let loose but quickly got fatigued by the repetitive scenarios. It’s a (mostly) found footage affair and the camerawork sure does make you feel queasy, sometimes on purpose and other times unintentionally. On another note, I wish there was more of Mr. Jones himself. I mean, he is the titular character. The writer/director, Karl Mueller, might have felt it necessary to portray him the way he did to advance the story to its climax but I can think of three simple ways to give him more time on screen and still maintain the mystique. If any ladies want to know how I would have made this movie you can PM me on my Spookr.

3 cock tease backstories out of 5